This recipe has been revised and updated here! 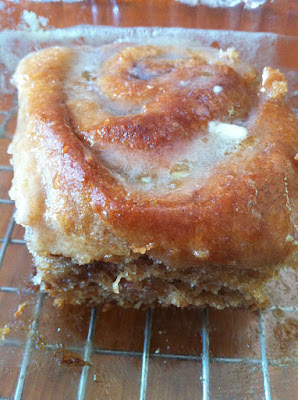 These are based the Pioneer Woman's Cinnamon Rolls recipe. I don't get in the habit of fixing what ain't broke, but I tweak.

We don't eat wheat (unless I cave and buy the Organic Artisan Breads from BJs, yum yum yum) at home and have been using spelt flour instead.  I can make this recipe entirely out of organic ingredients. It somehow makes me feel better.  Somehow. 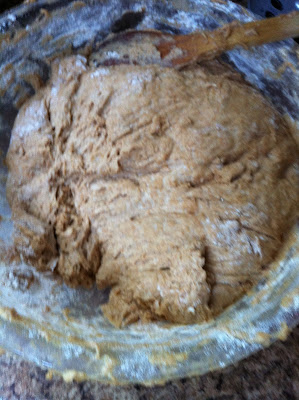 It's a lovely  and simple recipe really. 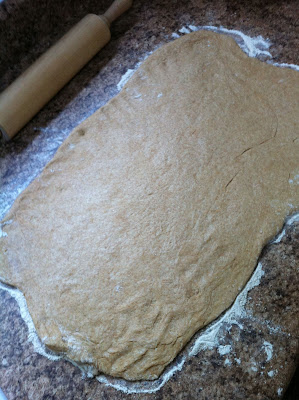 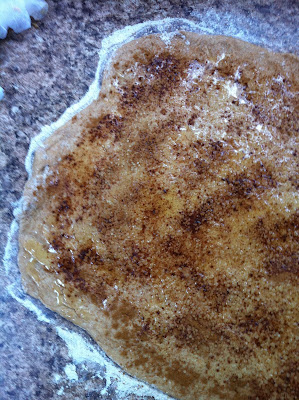 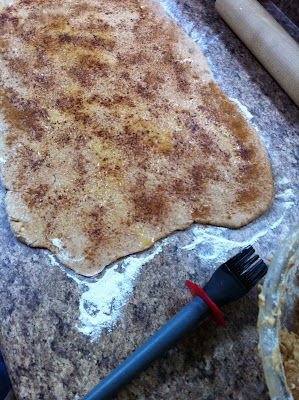 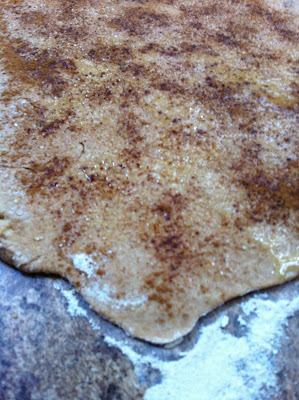 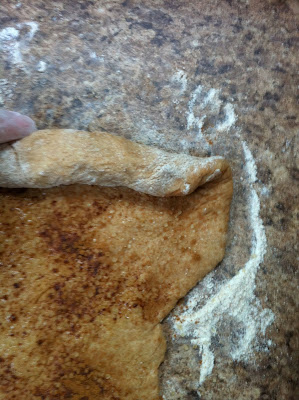 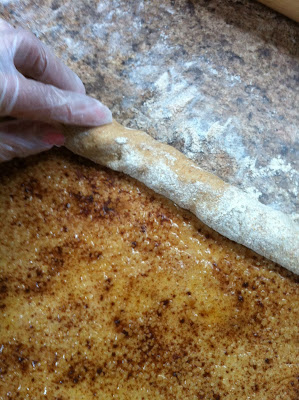 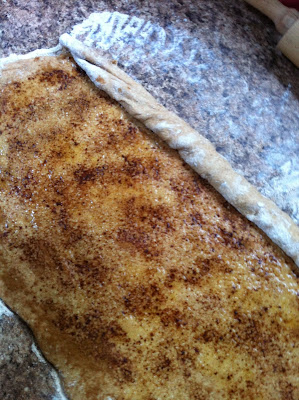 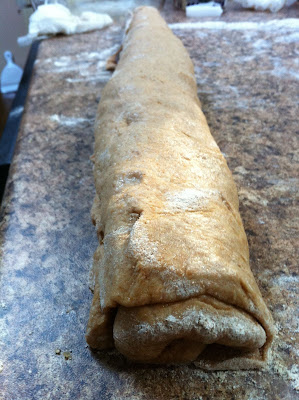 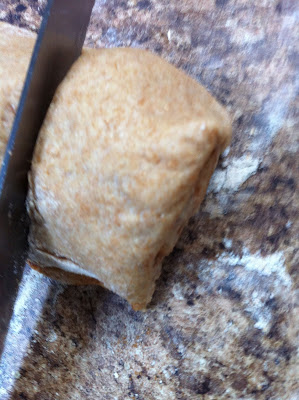 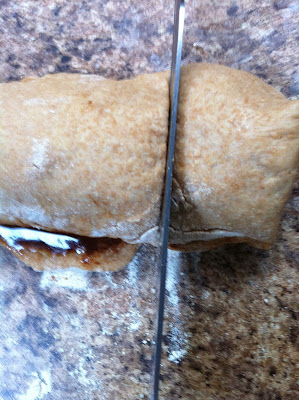 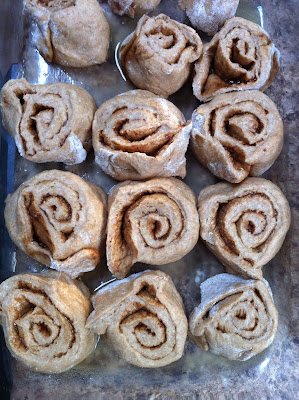 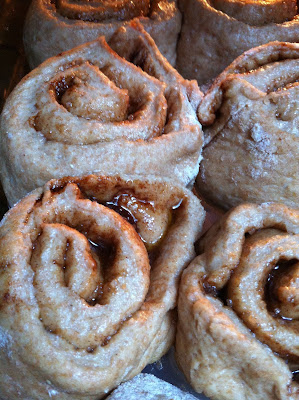 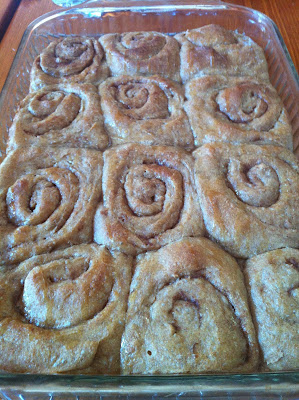 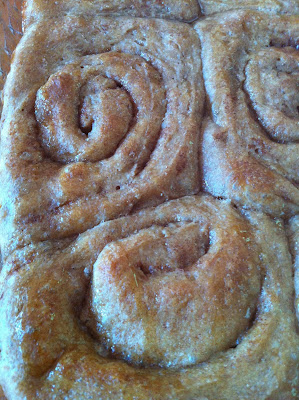 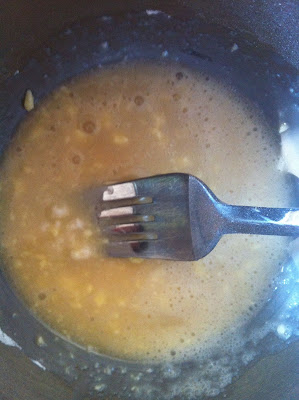 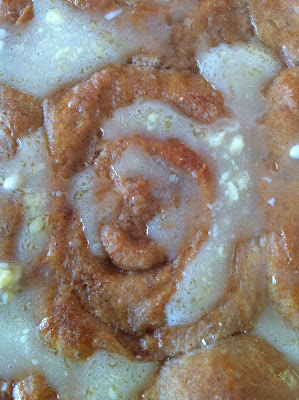 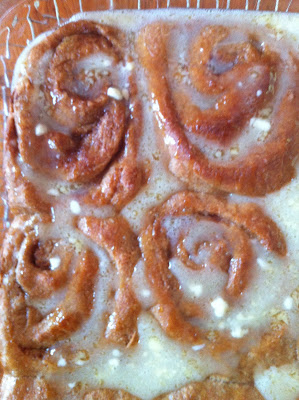 (Oops, didn't mix the frosting enough. I was hungry and impatient okay?) 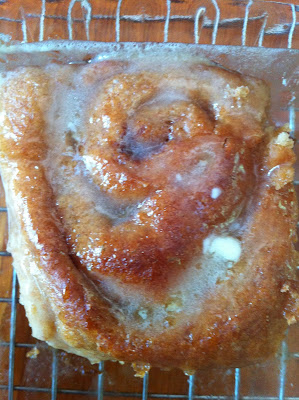 
Mix the milk, vegetable oil and sugar in a pan. Scald the mixture (heat until just before the boiling point). Turn off heat and leave to cool 45 minutes to 1 hour. When the mixture is lukewarm to warm, but NOT hot, sprinkle in both packages of Active Dry Yeast. Let this sit for a minute. Then add 8 cups of all-purpose flour. Stir mixture together. Cover and let rise for at least an hour.
After rising for at least an hour, add 1 more cup of flour, the baking powder, baking soda and salt. Stir mixture together. (At this point, you could cover the dough and put it in the fridge until you need it – overnight or even a day or two, if necessary. Just keep your eye on it and if it starts to overflow out of the pan, just punch it down).


Now, starting at the opposite end, begin rolling the dough in a neat line toward you. Keep the roll relatively tight as you go. Next, pinch the seam of the roll to seal it.
Then begin cutting the rolls approximately ¾ to 1 inch thick and laying them in the buttered pans.

Spread 1 tablespoon of melted butter in your dish. I use a 13x9 inch glass baking dish.
Repeat this process with the other half of the dough. Let the rolls rise for 20 to 30 minutes, then bake at 375 degrees until light golden brown, about 15 to 18 minutes.

Cool slightly and top with frosting of your choice.


(* All the instructions are taken directly from PW's site.  Giving credit where credit is due.  Any changes I made to her original recipe are in bold.) 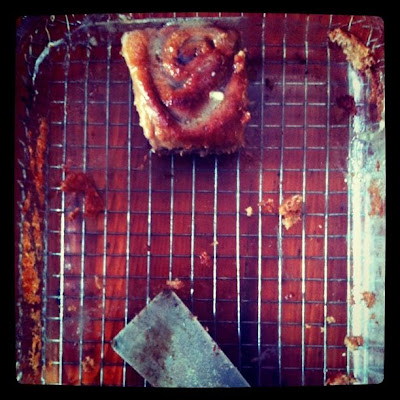 This recipe makes a lot.

Do you need to let it rise again after adding the additional cup of flour?
Katie and I have had so much fun making your recipes!
-Krista

that was little different recipe on this page
yet found funny doing them
organic milk, used this one organic a2 milk in bangalore | desi cow milk in bangalore which came out real well, and also all good health benefits of real a2 milk

Milking Process
The milking is done from indigenous cows by using hands. No machines are used in order to ensure no harm is done to the cows

Packing Methods
As soon as milking is done, the milk is filtered and packed in the FSSAI certified place with hairnets and gloves on this packing is done into the 50 microns wrappers which are not reactive to the food items. Again, no machines are used for packing to contribute to the environment, as they consume more water and power.

Milk Delivery
As soon as packing and quality check are done, the milk packets are collected and brought for delivery.